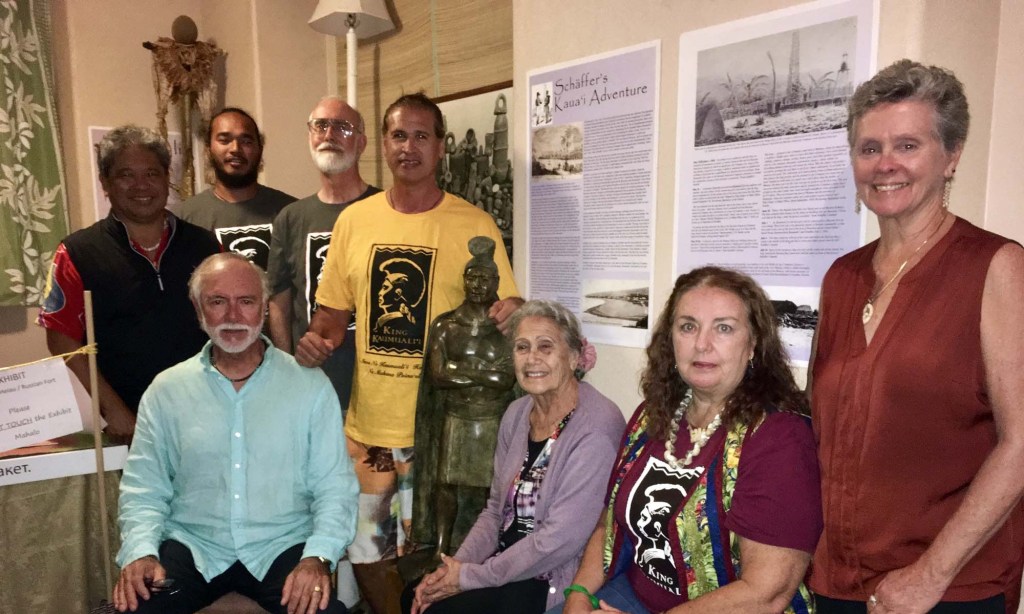 We are fortunate to be joined in our work by others in our community who are dedicated to perpetuating Hawaiian culture and values. Together we share King Kaumualiʻiʻs vision of a peaceful, cooperative and ecological society.

This value system from the past sets a high standard of respect and interdependence between people and land; one that can now be integrated with 21st century technolgy toward restoration and preservation for the present and future well-being of Kauaʻi.

Aletha Kaohi, President of Friends of King Kaumuali’i led from its early years to incorporation in 2012 and receipt of non profit status in August, 2016. As a descendant of the King, it was her vision and unfailing commitment that manifest the statue of our Mōʻī Aliʻi to Paʻulaʻula. She is manager of West Kauai Visitors Center, under Kauai Economic Development Board. She is a retired State of Hawaii librarian, a renown Hawaii Cultural Consultant, and was also a lecturer at Kauai Community College for seven years. She is a Grant Distribution Member of GN Wilcox Trust, Elsie Wilcox Trust and Mabel Wilcox Trust, and a Grant agent of the Dora Isenberg Trust.

Bob Westerman, Video President/ Treasurer Recently retired after 14 years of service as Kauaʻi Fire Chief, he grew up in a military family and joined the Air Force at 17 where he served for 20 years. After 13 years, eight as Fire Chief at Pacific Missile Range, he was appointed By Mayor Bernard Carvalho as Fire Chief to Kauaʻi Fire Department in 2005. Professionally and personally his mission is to give back whenever possible. Under his leadership the Ocean Safety Bureau thrived; and KFD helped with countless projects like Valentine Day dances for kupuna, swimming with long-term care patient from Kaua’i Veterans Memorial Hospital and assisting Kauaʻi Hospice with itʻs Fourth of July Celebration. His familiar refrain was, “What have we done to polish the Badge lately?” Off duty, he is a past President and 24 year veteran leader in West Kauaʻi Business and Professional Association, (WKBPA); served 10 years on Kauaʻi United Way; and was appointed in April 2019 to the UH Board of Regents.

Maureen Fodale, Secretary-On Board since 2013, she developed strong ties to the moʻolelo and culture of Kaumualiʻi and Kauaʻi through many years of research , hula and hana noʻeau under Kumu Hula, Pohaku Nishimitsu. She retired after 19 yrs of service for Kauaʻi DOE; and 20 years previously in California as a Waldorf teacher, administrator, and program assistant at UC Extension in Santa Cruz. Living in the ahupuaʻa of Waimea across the River from Paʻulaʻula, she is currently active in Hawaiian Studies Kumu/Kupuna Program under Kumu Sabra Kauka, and Kupu Ola with Kumu Kehau Kekua. She also serves on the Board of Garden Island Arts Council and is a member of Delta Kappa Gamma-XI chapter, an International society of women educators.

Peleke Flores, Director was born in Hilo and raised in Hanapepe, Waimea, and Makaweli ahupuaʻa. After graduation from Waimea High School in 2001, he pursued a double degree in Hawaiian Language & Studies at UH-Manoa. He worked for 8 &1/2 years as Ku Hou Kuapa Project Manager/Caretaker of Paepae O He’eia. He returned home to Kauaʻi in 2018 to become Project Manager for Malama Huleia where he labors tirelessly remove invasive mangrove along the river and surrounding Alekoko/Menehune Fishpond, thereby restoring native species to this site. He conducts trainings & workshops for volunteers, school & other groups interested in restoration of ancient Hawaiian sites and the sustainable practices used to support a vibrant, cooperative pre-contact society. “Our kuleana is to restore, repair, educate, maintain, sustain, and show the brilliant work of our ancestors and how we can carry it on in our lives
today using this 800 year old fish pond.” He also serves on the Boards of Iwi Kua and Nāpali Coast Ohana.

Keao NeSmith, Director born and raised in Kekaha, he is a Native Hawaiian linguist, educator, and translator. He has taught at various universities, including UH-Hilo and Manoa, where he received graduate and post graduate degrees; lʻUniversiteʻ de la Polynesie Francisco, Tahiti; and University of Waikato, Hamilton, New Zealand where he received his PhD. Presently, on faculty at UH-Manoa, he has translated a number of books into Hawaiian, including The Hobbit, The Little Prince and Alice’s Adventures in Wonderland. His most recent release was: Harry Potter a Me Ka Pōhaku Akeakamai; an ʻōlelo Hawaiʻi translation of J.K. Rowling’s Harry Potter and the Philosopher’s Stone, and is currently working on a Hawaiian translation of The Chronicles of Narnia. He developed Kaua‘i Nui Kuapapa: http://kauainuikuapapa.com for and with Kauaʻi County as a resource on moku, ahupuaʻa, place names, and moʻolelo from Kaumualiʻi’s time. He was also the model for our statue of King Kaumualiʻi, by artist Saim Caglayan.