Aletha Kawelukawahinehololioolimaloa Goodwin Kaohi is a lifetime resident of Waimea whose ancestry can be traced back to Kaumuali`i, sixth generation. She grew up in Pali`uli, ancestral lands in Waimea Valley. The preservation of Hawaiian culture & artifacts has been a passionate lifelong interest nurtured by her father, William Kapahukaniolonookainoahou Goodwin.
Her father was trained by his Grandmother, Kekuakepaleiliahikaowakaikalani, to carry on her work as a Kahuna`ana`ana, who used Kuni Ola in countering the sorcery. Fearful that Hawai`i was becoming increasingly western and the ancient ways no longer a way of life; she did not pass her “HA” to him but said, “that someday the tapa may be lifted.” He understood that the knowledge he had learned was covered by the tapa.

1978 a thief stole 90% of his stone artifacts. He realized then that death would take the knowledge taught him by his grandmother. He went into prayer, asking that the tapa be lifted. The tapa was lifted and Aletha was chosen by Na Kupuna to be their spokesperson. She spent a year with her father who passed on his knowledge ʻike, his attributes, his kapu secrets—manaʻo his youngest daughter, as Keeper of their Hawaiian Culture.
“Underlying Aletha’s busy life is a calm and spiritual strength drawn from her past. She pours that strength and her energy into her numerous activities. Her motive is to better the lives of her family, neighbors and generations beyond, and to perpetuate the past.” It is fitting description. D. Stewart, Kaua`i Magazine, Spring 1998.
At Moʻokūʻauhau O Ka Lāhui on May 8 & 9th Aletha will display some of her rarely seen family artifacts. She will also share ancestral stories, including Kaumuali`i’s Tapa Moe. In this moʻolelo King Kaumuali`i created a ritual, Ali`i mahu, that allowed him to change to be with a commoner since ali`i and commoners are forbidden to have romantic relationships. A son, Kainoahou, was conceived and, at birth, was wrapped in Kaumuali`i’s tapa moe. Aletha Kaohi is caretaker of that tapa moe and many more stories hidden beneath it. 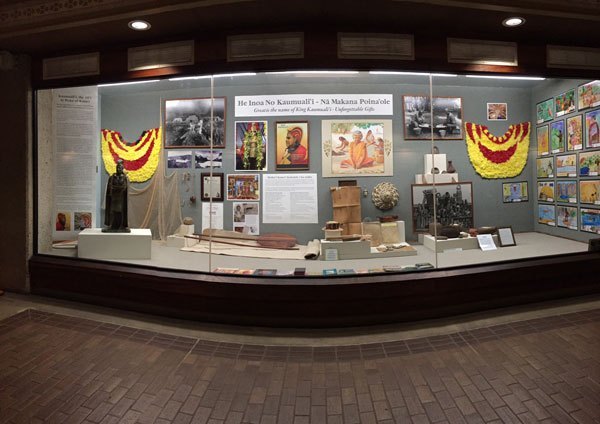 As an artist, Brook has illustrated numerous children’s books for Aha Punana Leo Hawaiian Language Emersion Schools. Other clients include Disney’s Aulani Hotel, Kamehameha Publishing, The University of Hawaii at Manoa and Hilo, State of Hawaii Board of Education, Conservation council of Hawaii, Hawaiian Islands Humpback Whale Sanctuary in Maui, Hui Malama o Waimanalo and ongoing projects with the Pacific American Foundation to name a few.

In 2012, For the first time, a piece of Native Hawaiian art is hanging in the room where the Senate Committee on Indian Affairs meets, in the Dirksen Senate Office Building in Washington, DC. The Committee, which oversees legislation relating to American Indian, Alaska Native, and Native Hawaiian groups, was chaired by Senator Danial Akaka, the first U.S. Senator of Native Hawaiian ancestry. The room’s walls feature art by American Indian and Alaska Native artists, but until now no work by a Native Hawaiian artist had been featured, according to the Hawaiian Way Fund, which worked with businesses and nonprofits to purchase the piece. The work, a painting by Brook Kapukuniahi Parker entitled “Aha Ula,” was hung on Thursday, September 20, 2012prior to a Committee meeting, and is on permanent loan to the Committee.

Commenting on his art Brook writes; “I firmly believe we ALL have been blessed with some God given talent. These talents are diverse and may not be as visible as in being an artist, musician, singer or athlete, etc. Whatever it is, our obligation is to identify those talents we posses, improve upon them and then share them with others. I am very grateful and thankful that I can share my deep love of my ancestors through my artistic God given talents. An illustration is first felt in the heart, visualized in the mind, and eventually out through the hands and on to the paper.”

Recently I have begun to paint with oils, before that I only used pencils, colored pencils and marsh pens. My father David Paul Parker and Herb Kawainui Kane are those I look up to as far as Hawaiian visual art. Both were very inspirational as I rode their shoulders in my younger years and never would I imagine walking in their footsteps today. My hope is to teach and inspire our youth to develop their artistic gifts and continue to share their aloha visually for our beloved ancestors.
Brook is married to the former Drena- Jo Kauakoko’ipohaiapuninamoku Kalani and they are the proud parents of five children, two sons and three daughters. They currently reside in Kalihi, O’ahu.