Chris Cook, known to many on Kaua’i as a longtime editor in the 1990s of The Garden Island Newspaper is also known to be a tireless researcher and author of Hawaiian History. He spends endless hours digging through files in archives across the globe; and has been fortunate to find long forgotten clues and missing pieces of biographies from the early 19th century.

Please enjoy a link to his blog page which focuses on his book: The Providential Life & Heritage of Heritage of Henry Obookiah; Why Did Missionaries Come to Hawaii from New England and Tahite?

You may recall that although Obookiah died before returning to Hawaii, he was being groomed along with four other Hawaiians to be the first native missionaries to serve in their own country. Humehume, Kaumuali’i’s son was one of the four who returned in May 1820, and his story is an interesting adjunct in the book above.

In his blog Cook shares a recently discovered article in a 1826 Philadelphia newspaper written on Humehume’ life and death. This clue may lead to others in search solve the mystery of where Humehume o’iwi are interred.
http://obookiah.com/2020/09/new-details-on-death-of-george-kaumualii-humehume/
Below is a summary of Kaumuali’i Kidnapping by Liholiho aboard the Ha’aheo Hawaii in 1821 after which he was forced to marry Ka’ahumanu, widow of Kamehameha I. This excerpt is taken from his book, Kauai Reader, which has many fascinating stories of early Kaua’i. Although it is now out of print book, it may still be borrowed from state libraries.

Despite the many peaceful overtures of Kaumuali‘i and his queen, Deborah Kapule, political intrigue continued and after Kaumuali‘i made good his promise to peacefully submit to Liholiho, following Kamehameha I’s death in 1819, he was kidnapped in 1821 by the young king aboard Haaheo o Hawai‘i [Cleopatra’s Barge], the royal yacht of Hawai‘i.

Kaumuali‘i accepted his fate, saying, “King Reho-Reho, hear; When your father was alive, I acknowledged him my superior. Since his death, I have considered you as his rightful successor, and according to his appointment, as king. Now I have a plenty of muskets and powder, and a plenty of men at command, these, with the vessels I have bought, the fort, the guns, and the island, all are yours. Do with them as you please. Send me where you please. Place what chief you please as governor.” [from The Hawaiian Kingdom Vol. 1 1778-1854 by R. Kuykendall]

Liholiho fulfilled Kaumuali‘i’ dreaded wish. He was forced to leave Deborah Kapule and to marry Ka‘ahumanu, one of Kamehameha’s wives. Initially the Kaua‘i king was also kept in virtual house arrest on O‘ahu, while O‘ahu ali‘is began to divide up the lands of Kaua‘i.

Kaumuali‘i quickly grew accustomed to court life in Honolulu and became a fervent Christian and student of the missionaries. In spring 1822 Kaumuali‘i and Ka‘ahumanu  with an an entourage of ali‘i and servants toured the windward islands on a religious crusade of sorts.

In August 1822 Kaumuali‘i and Ka‘ahumanu with a party of chiefs and servants, and followers, numbering nearly twelve-hundred persons, sailed for Kaua‘i and Ni‘ihau aboard four ships including Ha‘aheo o Hawai‘i. Ka‘ahumanu collected ho‘okupu offerings from the people, and sought a cargo of valuable sandalwood. The Tahitian teachers Auna and Aunawahine joined them.

*The following is an excerpt from Lee Croft’s new biography on King Kaumuali’i which was published in April 2017. As a Professor Emeritus and Russian Scholar, Croft offers insights and details translated from journals and letters of Anton Shaeffer based on conversations with the King while the fort was under re-construction in 1816.

*Enjoy this excerpt featuring the King in his youth, as an interested and curious learner and an accomplished athlete. 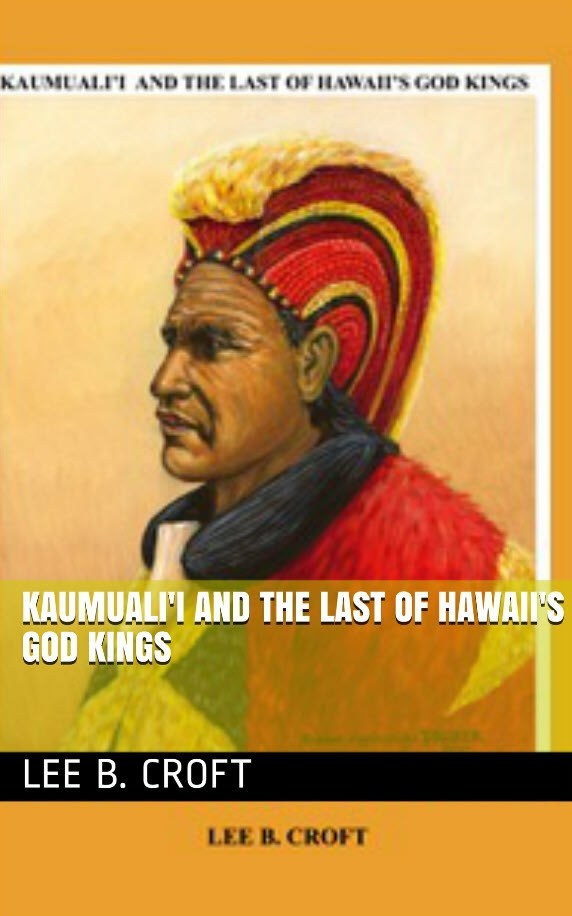 Kauaʻi’s last independent King (“Aliʻi nui”), Kaumualiʻi, was born in 1780 at the Birthstones of the Holoholoku Heiau above the banks of the Wailua River on Kauai’s eastern shore. His mother, Kauaʻi’s distinquished ruling Chiefess, Kamakahelei, announced his name as “Ka-umu-aliʻi,” meaning “the oven of the nobility,” signifying her prediction that he would become “the means of nourishment” of Kauai people. His father “known as “Kāʻeo,” brother of Maui Aliʻi Kahekili, was a tall and very strong man, known as a particularly formidable warrior who strode fearlessly to meet adversaries with two ferocious “man-eating” mastiff dogs.

Kāʻeo and Kamakahelei were the Aliʻi who ventured forth in a double-hulled canoe to make “first contact” with English Captain James Cook and his men on the ships Resolution and Discovery anchored offshore at Waimea on January 19, 1778.

It was Hawaiian custom, called “hānai,” of the high aliʻi to have those of their children who were intended future rulers to be adopted by other relatives, to raise through their dependent childhood. In this way, Kamakahelei’s son with Kaneoneo, Keawe, who was born about 1777, was given in a hānai arrangement to the family of Wailua District senior Chieftain Inamoʻo.

The younger son, Kaumualiʻi, from husband Kāʻeo, was not adopted out to others. He was instead raised in the Wailua household of his mother. She was the primary influence in his young life, since his father Kāʻeo was often away on military campaigns on the other islands.

It was, then, Kamakahelei who personally taught him to chant his very long “mele inoa,” or “song of identity,” evidencing his personal genealogical connection to the Hawaiian Gods and thus his powerful mana. Memorizing and reciting such long chants with the required exactitude was very difficult and took most of the ruling aliʻi years of their childhood to accomplish. But young Kaumualiʻi took joy in the task of learning and mastered his chant in such a short time that his parents’ “kāhuna” (“priests”) were positively impressed and came to respect his prodigious memory and quick mind.

These priests explained to Kaumualiʻi the need to respect and enforce the Hawaiian system of “kapu” and sacrifice, which pleased the Gods so that they protected the people of Kauaʻi from natural disasters, from privation, and from subjugation by other peoples. As a result of this instruction, Kaumualiʻi became quite religious even as a youth and spent significant time in prayer (“pule”), seeking advice from the Gods.

Learning His Island to Become a Wise and Competent Ruler

In his youth, Kaumualiʻi learned to fish with hooks and spears and nets. He learned to manage fish in man-made ponds. He learned to plant and harvest taro in irrigated plots called “loʻi”. He learned how clothing and canoes, “waʻa” were made.

He grew up to be tall and strong like his father, and in his teens established himself as one of Kauaʻi’s foremost aquatic athletes. He could stay under water longer, swim faster, and surf the waves more ably than anyone else. He could paddle canoes more strongly than others of his cohort for many hours without resting. He made “spirit leaps” into the water from all Kauaʻi’s prominent heights to “prove his mana.” And he became proficient in the use of weapons, wooden daggers and spears, shark-toothed clubs, and, in his early adulthood, western metal swords, firearms and cannon. 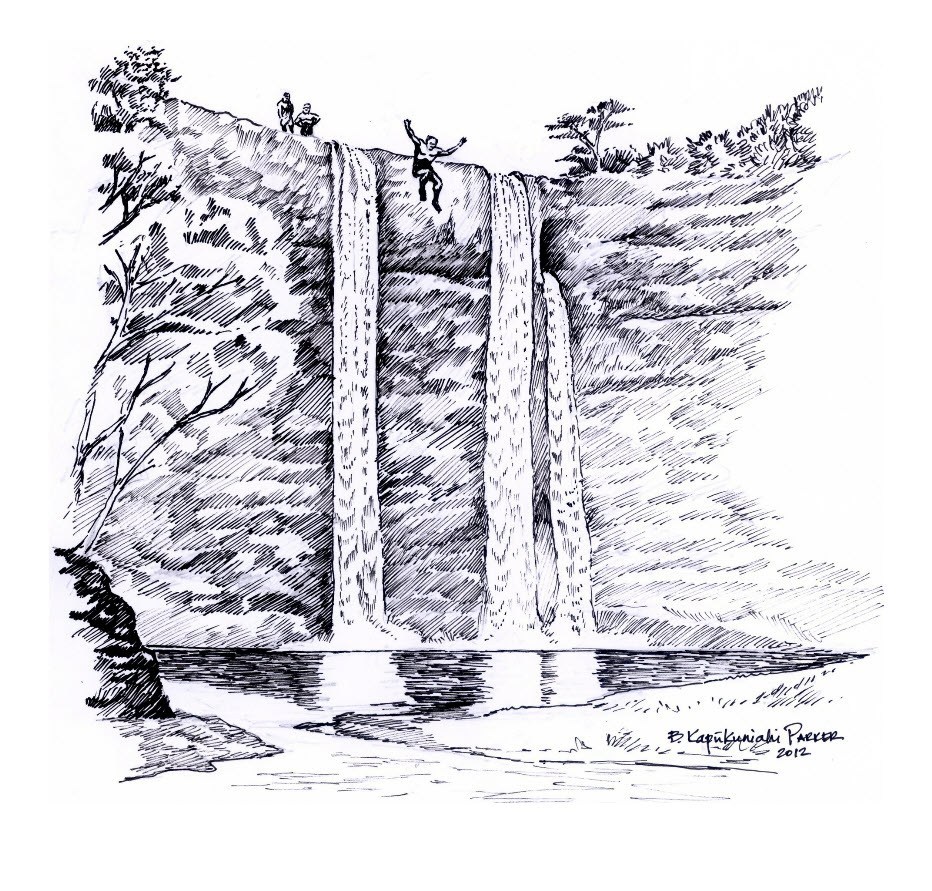 Early Interest in the World and Learning a New Language

Kaumualiʻi as a young man was always curious, asking frequent questions of his elders and of the foreigners, like English Captain George Vancouver he first met in 1792. He applied himself especially enthusiastically to the study of Vancouver’s “foreign language”, English. In time his skill in English became immensely valuable to him, as he used it to communicate with diverse English and American seamen, traders and, later, missionaries.

Helping him in this effort from an early age were three sailors named Rowbottom, John Williams, and James Coleman who were left behind on Kauaʻi to collect sandalwood by American Captain John Kendrick of the Lady Washington in 1793. These three gave Kaumualiʻi much of his first English language instruction, albeit of a very rough, often profane, quality.

Later Kaumualiʻi engaged Boston seaman John Gowan as his interpreter and instructor of English. It was Gowan who pointed out to Kaumualiʻi that there were different levels of English that he should speak to different people in different circumstances and this Kaumualiʻi learned to do. He soon came to call himself in English by the name “George,” after Captain Vancouver and the English King George III. He also gave his son, Humehume, the English name “George.” 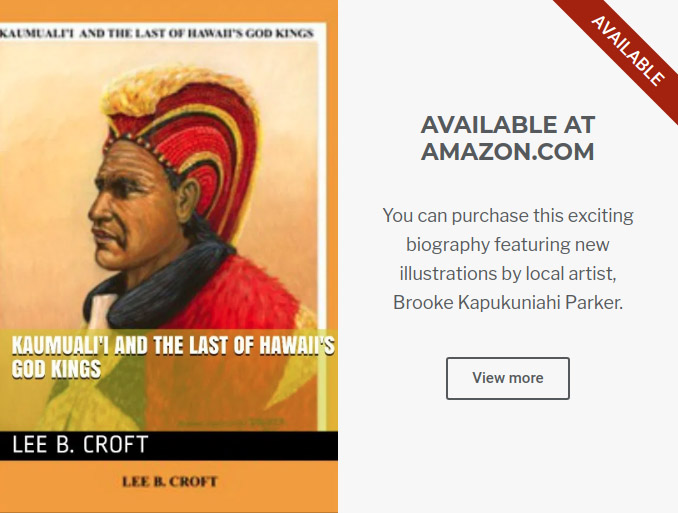