The King is Home!

Kumu Kēhaulani Kekua mesmerizes the audience at MaiKaʻi Kauaʻi-He Inoa No Kaumualiʻi with two chants written to honor Kaumualiʻi linked by the ancient saying in both:Maika`i Kaua`i Hemolele I Ka Mālie” which celebrates the incomparable beauty, peace and excellence of Kaua`i Island. The first is a 19th century Mele Inoa written for King Kaumualiʻi by Kapaʻakea, father of King Kalakaua for his daughter-in-law Kapiolani, who is the Grand-daughter of King Kaumualiʻi. The second, written linked in 20th century by her Great-Grandfather, Henry Waiʻau. She shared her own continuing genealogical connection to Kauaʻi, music and hula which she carries forward from her grandmother. Her Halau Palaihiwa O Kaipuwai shared a featured performance demonstration.

Kumu Kēhaulani, herself an accomplished artist, inspired Saturday workshop participants to create their own personal connection in a Culture to Canvas workshop: Painting the Aliʻi Spirit of Kaumualiʻi & Kauaʻi. The workshop theme is the foundation of Friends of King Kaumualiʻi Hoʻokupu Banner Project with schools creating Banners with a verse from mele as hoʻokupu for the statue dedication in Autumn. Teachers, students and interested public enjoyed this full house personal painting workshop.

View the 4 Part video of Kumu Kēhaulani’s Moʻokūʻauhau, the Kaumualiʻi Mele Inoa, and the story of the modern Maikaʻi Kauaʻi song, written by her great-grandfather. 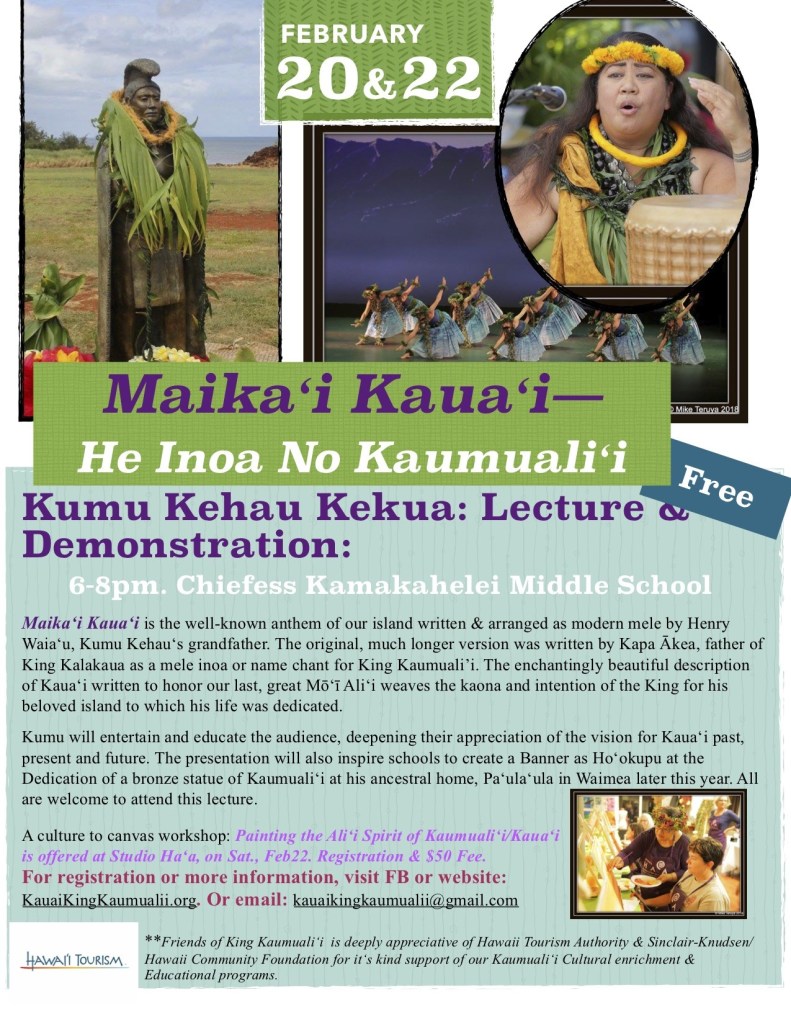 Kumu Kehau Kekua shares manaʻo on the deep ties between Kaumualiʻi and Kauaʻi based on his Mele inoa -part of which was later made popular by her grandfather in the Mele, Maikaʻi Kauaʻi.

Painting the Spirit of Kaumualiʻi; Saturday February 22 , 2020 at Studio Haʻa